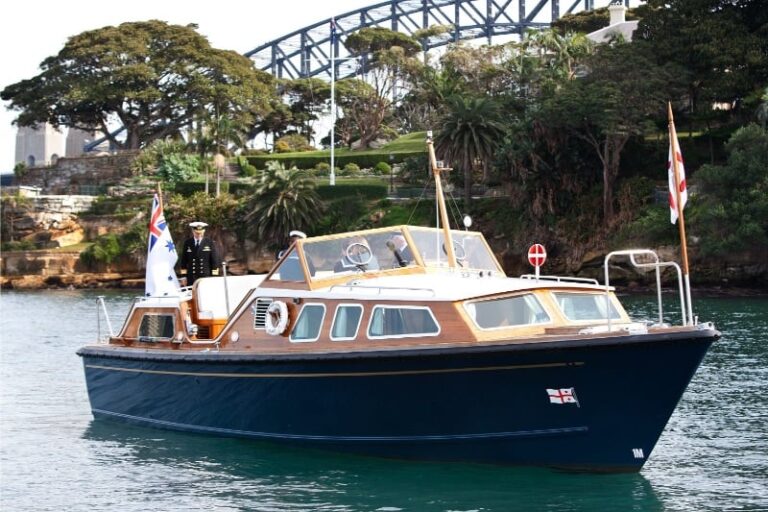 Early in the year 1992 a tender arrived on my desk for the Royal Australian Navy. This looked exciting. I opened the tender documents to see what sort of Naval vessel we would be required to build. On reading the requirements I found the vessel was for a new “Admiral’s Barge” that was to be built to replace an aging Admiral’s Barge built by Millkraft in the mid 60’s. The RAN required a traditional Admiral’s Barge built of timber along the classic lines of the Royal Barge carried on the Royal Yacht “Brittania”. What an exciting project but some questions were raised. Who were our competition? How do I design an Admiral’s Barge?

The tender required many drawings including lines plans, profile and arrangement plans, machinery plans and structural plans just to name a few. Nigel, my wonderful offsider, and I set to work. We decided to use the proven Amity Class Pilot Boat hull design and shrink it down to 12 metres (the required length). The Admiral’s Barge had to have the ability for search and rescue in a sea state roughly 7-8 feet, so rough conditions. We decided the Pilot Boat hull was the perfect option and proven in these conditions.

The vessel was required to have a maximum speed of 20 knots fully manned with full tanks of fuel and water. We did a weight estimate so we could then see if our Amity Class Pilot Boat tank testing model would be used, if the weight scaled to our desired 10 tonne loaded. It did, so we now had a proven hull and tank testing results to suit the displacement of our 12 metre vessel.

From the tank testing results we could predict the power requirements for 20 knots and also the fuel consumption. We then selected a suitable power plant and decided on twin Perkins 229HP each. We now had all of our basic requirements, which allowed us to do a detailed specification and pricing for the vessel.

The hull was to be cold moulded using three layers of Queensland Maple on laminated Mahogany frames, the stringers were to be Silver Ash or Douglas Fir, the super structure Burmese Teak (clear finished), and a laid teak deck. The interior was clear finished Queensland Red Cedar with the upholstery to be white leather with blue piping. I styled the boat to look like the Royal Barge and then Nigel drew up the final plans for submission. Our tender was now submitted to RAN Office.

After a 6 week wait Nigel and I were invited into the city for a pre-contract meeting. We duly arrived at the designated time to face a board of 23 Navy personnel. I was in a bit of shock as I had never experienced such a team of people to make a decision about such a small project (by Navy standards). Lt Commander Ben Vernon Rogers stepped forward and met Nigel and myself, he was a great bloke. He asked us to take a seat around this massive table and then promptly announced that he no idea why he had to have 23 Naval Officer present from all over the country, when he and his small band of people from the Naval Small Vessel Branch could have easily done the meeting.

I liked Ben a lot. He then announced that he and I would be the only two people to speak and all others at the meeting had to be quiet. Perfect. Ben then said he had the meeting scheduled to last 2 hours and then he and I would be having lunch together. Things were just getting better and better.

Ben ran the meeting and I answered the questions. All went really well until about 1.5 hours into the meeting when a Naval Architect called Walker, interjected and said he had doubts about the speed and range that Nigel and I had predicted. This made my blood boil and Ben was really angry with this Naval Architect from the RAN office in Canberra. Ben asked him directly how many boats he had designed and he answered, “None”. Ben asked me how many boats Nigel and I had designed as a team, and the answer was “many”, probably 16 up to this point. That settled the argument and we had our way. Little did I know at the time, this fellow Walker would be become a thorn in our side for the final part of the contract.

Ben and I signed the contract and we were underway.

Nigel and I completed all the detailed planning and presented the plans to Lloyds Classification Society Australia for approval. No one at the Lloyds Australia office had the knowledge to assess timber construction plans for approval. They then sent the plans to their main office in London. They sat in the too hard basket for a month! I decided to fly to London to try and sort out what was happening with our plan approval. The London office has the same problem as the Australian office, trying to find a person in their organisation who was familiar with cold moulded timber boat construction.

After a two day wait they found an old Lloyds Surveyor who knew timber construction well. He came into London and met with me in the very plush offices, he was a delightful and intelligent person, we got on very well. We immediately went through all of the plans in case any obvious problems could be highlighted before my return to Australia. A week later I had all the approved, stamped plans from Lloyds London on my desk. Finally we were set to build.

My Brother Ian lofted the boat full size and then we began the process of laminating the frames. At the same time the keel, stern and transom were built. One week later we set up all the frames on the back bone, that had already been assembled, ready to cut in and fit the deck shelf, sheer clamp and stringers. It was at this time that we knew we were building a very sweet vessel. The lines were now obvious, a lovely fine entry, with a chine developing from midship aft.

As the lines swept aft they finished at the nicely tucked in curved and raking transom. I clearly remember standing with Nigel, both of us had beaming smiles on our faces. This was going to be a special boat.

The frames and stringers were faired ready for planking. The planking was three layers of Queensland Maple fully glued with epoxy. The final layer was screwed to the frames, stringers, transom and stern. The first layer was laid at 45 degrees to the keel, the second layer was at minus 45 degrees to the keel and the third layer was fore and aft. The screw holes were plugged with maple plugs not filled. This ensured no print through when painted in a dark colour (navy blue or dark green). The hull was then faired and sheathed with a light 250 gram fibreglass cloth and epoxy resin. The hull was then filled again, faired and painted up to a final undercoat.

The interior was built by our head ships joiner Peter Roberts. Built using Queensland Cedar, the finished fitout was perfection.

Lex Baddiley did a beautiful job of the engineering, shafting and rudders. The whole Norman Wright team just did a wonderful job, their passion for this boat was obvious. Nearing the end of the building process the painting and varnishing took precedence over the other jobs. The hull was painted in high gloss dark green with a gold cove line black antifouling to finish the bottom. The superstructure sides, centre and aft cockpits were clear finished with 12 coats of Awlgrip Spar Varnish. The interior was finished with a satin varnish, which highlighted the beautiful swirling Queensland Cedar grain.

Before launch, Lt Commander Ben Vernon Rogers paid us a visit to check on the progress, as he had done all the way through the various stages of construction. He was full of praise for the workmanship the boys in the shed had achieved.

Now the pre-launch inspection was complete we moved the boat onto the slipway and launched her into the murky waters of the Brisbane river, late in the day as the twilight peered through the heavy clouds. There was enough light to see the beautiful profile of the Admiral’s Barge, sitting perfectly on her designed waterline. Happy? You bet, very happy. Ben took our little team to the Norman Hotel for a magnificent steak dinner, along with copious amounts of red wine, rum and cigars.

I have no memory of returning home that night, other than being told I was in the boot of my Wife’s Saab! Next day, oh boy, what a headache I had. But that didn’t stop us getting the vessel ready for the next stages including testing for stability and sea trials.