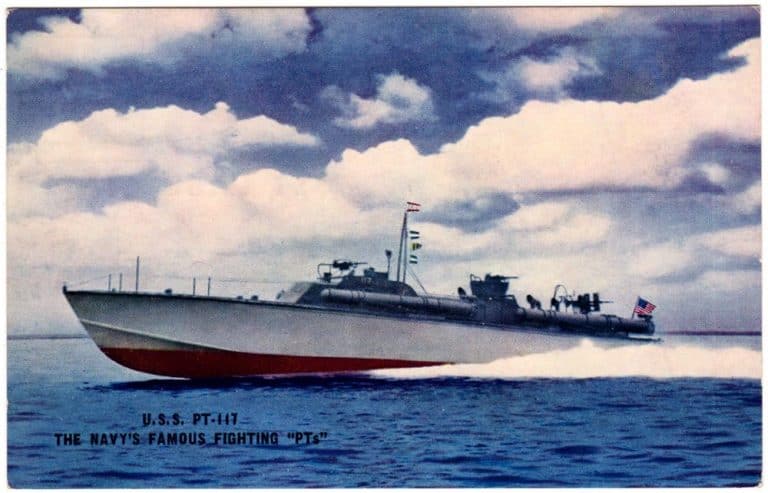 During World War II, Norman R. Wright & Sons became a hub for building and refitting boats for the Navy, Army and Air Forces from Australia and our Allies including the infamous PT (Patrol-Torpedo) Boats. A focus of a lot of the work undertaken was repairs to boats damaged in the Pacific Theatre conflicts or the commission of new boats, which arrived from the US.

The most impressive boats NRW worked on during the time were built by Elco, the Naval Division of the Electric Boat Company in the US, with their largest being known as “80 Foot of Wood and Weaponry”.

Interestingly the Commander of each boat would also “pimp up” his boat with more custom weaponry that they would “borrow” from aircraft or other boats.

Speeds: In normal armed conditions (non-pimped) the boats would achieve 42-44 knots with Ron Wright testing some of the boats unarmed and, they would hit up to an unbelievable 48 knots. This was based on not carrying a lot of fuel, freshly painted hulls and fully polished props. But you can understand why these boats were so impressive. (We thought our new custom built 60 game boat “Aura” was impressive at 40 knots!!)

Range: Managed well at cruising speed the boats could achieve up to 1,400 nautical miles.

Construction: The boats were all timber construction, the following specs may interest those with a technical interest in timber boat building.

Bottom Planking:     2 layer Mahogany laid diagonally opposing at 45 degrees to the keel. 7/16th inner layer and ½ inch outer layer. In between the layers was marine glue and Muslin and the planking was fastened with Monel screws.

Now you may wonder how I know all this? Well many years ago Ian and I were going through our old archives and we came across this large manilla envelope marked “Top Secret – US Navy Dept.” We opened it of course and inside was a lines plan, construction drawings and a lot of information about the Elco PT Boats. What a find!! This explains one of Ian and my favourite photos in the design office – a framed photo of PT 117 at maximum speed.

We also found a US Navy manual of Seamanship and an original operating manual for the 63 ASR (Air Sea Rescue Boats), what a find! Around this time Ian was cleaning up the old main store at the Quay Street yard and he found these strange compasses and on asking Dad what they were, he confirmed they were Gyro compasses from the Elco PT Boats. I was also cleaning around the office at the time and found an old trunk that inside had a whole heap of gear from the PT Boats

including 50 calibre machinegun ammunition, 20mm cannon ammunition, aircraft inflatable lifejackets, Aldis lamps and much more. Ian and I started to talk to Uncle Norm about the items we’d found and he told us about one of the boats.

The Elco PT Boat had arrived on a ship and as it was being craned into the water it was accidentally placed on some piles and they pierced the light timber hull causing major damage. The boat was immediately craned out of the water and stored

on a Lighter nearby. The Commander of the boat made contact with Norm asking if a team of boat builders would be immediately available to help repair his boat. The Commander said payment wouldn’t be an issue as he would pay for the repairs himself, which was a bit strange as the US Navy normally provided an order for repairs but it always took a little bit of time.

Norm, George Franz and a small team were immediately despatched to start work on the repairs and Norm and the PT Boat Commander hit it off from the first time they met. Norm agreed that the team would stay on the Lighter until the boat was repaired, where the team enjoyed plenty of ice-cream, chocolates, great food and an endless supply of Rum and Beer. Norm said it was a great experience.

Norm and his team repaired the boat in excellent time, with the Commander also requesting a number of custom modifications and all were completed before the team left. The Commander of the boat was extremely happy, the payment was made in US dollars and as it has it the Commander was a member of a very wealthy Texan family, so money was never going to be a problem. Norm and the Commander remained friends until the Commanders death in the late 80’s, Norm staying with the family whenever he was in the US.

Once commissioned the boat was deployed to the Pacific where it saw a lot of action where it fought in what was called the “Tokyo Express” in Guadalcanal. The boat also saw action in Rendova, Vella Lavella, Bougainville and Emirau. The boat was finally destroyed by Japanese aircraft in Rendova Harbour in the Solomon Islands, all the crew fortunately survived.

Such great history and so very proud that NRW played our part in helping the Allies during the War.