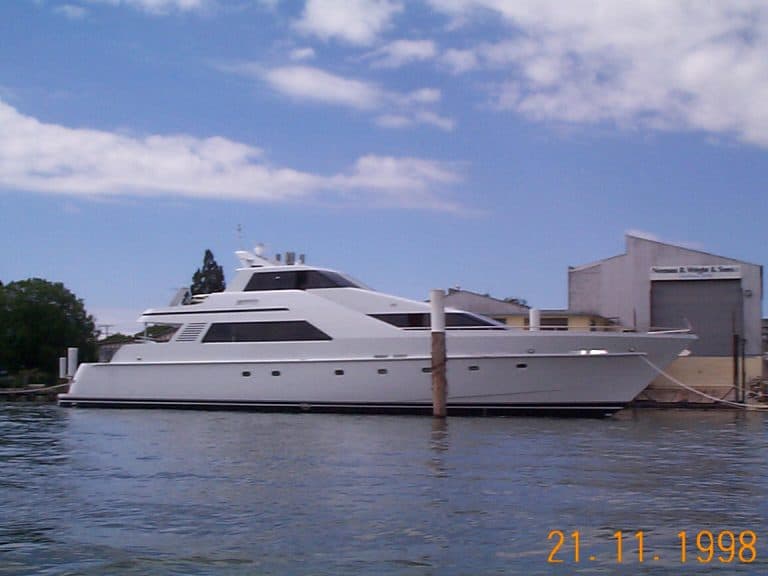 Crafting A Timeless Design – The Story Of Whistler – Part 2

About 12 months after our meeting with the client, Captain Ian Sergeant contacted me and asked if we were still interested in building their proposed boat. I said that we were. Ian then asked us to update the price of the vessel as designed. We did this and then presented our new proposal for the building of Whistler. After a brief meeting, it was agreed to proceed to detail design stage and to commence construction. The contract was then signed with the proviso that the new vessel would attain a maximum speed of 26 knots when half loaded with fuel and water and have the ability to cruise at 22 knots. The other major decision made was the vessel was to be of composite construction.

High Modulus undertook the detailed composite engineering design. In order to reduce the weight of the overall structure, it was decided at this time that the primary hull structure, engine room structure and part of the superstructure construction would be in carbon fibre. This was a novelty for any superyacht built at this time anywhere in the world. Whilst awaiting the client’s decision to go ahead with the vessel, we had acquired the services of our new Naval Architect, Adam Evripidou. Adam had arrived at NRW from Ian Murray & Associates to complete the design of the 37’ picnic boat “Restless” for Egil Paulsen. Adam was young, extremely bright and a great stylist. He fitted in well with Nigel Rose and myself in the design office and the result was an extremely talented, hardworking and happy design team. We continued to work together up until 10 years ago when sadly, Nigel was forced to retire due to failing eyesight.

Adam assisted me into the age of Computer Aided Drafting (CAD). His first job on the Whistler project was to take each of Nigel’s and my long hand drawings and put them into CAD. The hull was our first priority. Upon Adam’s suggestion, we immediately purchased the Maxsurf Naval Architecture design software package. Andy Dovell from Ian Murray & Associates lent us a MAC computer and 15” monitor to run the program. As Adam proceeded with the CAD drawings, Nigel and I did a very detailed weight estimate to make sure we were correct with our earlier estimates. I also proceeded with a very detailed design of the propeller and performance predictions – There was no room for mistakes!!

Our head of fit-outs was Peter Roberts, a very clever, hard-working ships joiner who had been with NRW since 1976. Peter oversaw a very dedicated and highly talented team of ships joiners, cabinet makers and boat builders whose job it was to create the interior.

The owner had appointed an interior designer called Pam Brown. Pam was a petite elderly lady, full of energy who really knew her job. Pam and Peter hit it off immediately. Pam understood the weight constraints required when fitting out a boat and a good grasp on the three-dimensional aspects of a vessels hull. This was unusual as most interior designers considered everything as a square-cornered box! Pam and the client’s wife made a great team. They made decisions as required and would stick with them. This efficiency really assisted in keeping the overall build on track.

The build progressed well. We held weekly production meetings to which everyone involved in the design and construction attended. The production schedule was checked as we all knew we had to launch the boat on, or before the 26th of November 1998.

Keeping to schedule became difficult when delivery of the engines was delayed. The Detroit V16 2000 Series 1800hp engines were still under final development in the factory in the USA. To expedite the delivery, I flew to Detroit in the USA to apply pressure to get them delivered asap. They agreed to push on as hard as possible and then airfreight the pair of 4 tonne monsters out on a cargo 747. This worked and we had the engines in the boat five weeks later.

The furniture loft was super busy 10 hours a day, 6 days a week. Peter had flown to Holland to hand select the American Cherry veneer that was to be the interior finish material. The 1mm veneer was vacuum-bagged on to the feather light panel with epoxy glue (another first for this time). On completion the furniture looked like it had been built from solid 25mm thick American Cherry. Each cabin was built on the loft floor, lacquered and then dropped into the hull as a unit. Very labour-efficient. Once the cabins, engines and other machinery were in place, the deck and superstructure were craned into place and then glued and glassed to the hull. The hull and superstructure were ready for the finishing coats of paint (all components were finished up to high build paint prior to laminating in place).

By the end of August 1998, the vessel was starting to look like a real superyacht. The electricians had run 6 tonnes of wiring through the vessel, the marine engineers had run all the plumbing and bilge systems and the propeller shafts were being fitted. The fit-out team were building the wheelhouse console, dining tables and aft deck fit-out. All was running to plan.

At the end of October, I thought “Yes!! We will launch on time.” The boat was beautifully faired and painted. The propellers (purchased form Lips in Holland” were fully polished and fitted. The electricians were finishing off their systems. The marine engineers were finishing off the fuel and water systems. The electronic technicians were starting to test each of their components. The two coats of antifouling were applied over the high build. The antifoul was then wet and dry sanded to a smooth finish. The upholstery was being fitted. At this point we also weighed the boat for the final time before going into the water. We calculated the weight and balance – 178kg over the original estimate and the balance was almost perfect. Yes, excellent! Time to go onto the slipway!!

We had built a special, pivoting bogey on the slipway for the forward end of the vessel to allow it to go from the level shed to the angled slipway with minimal stress on the hull structure. She rolled out of the shed beautifully. All sea cocks, stabilizers, props, rudders and other underwater fittings were checked.

On 22 November 1998, launching day had arrived. I was a nervous mess! As she slid into the water and settled perfectly on to her waterline, my nervousness evaporated. She looked magnificent (from my completely unbiased view!)

As soon as she was alongside the jetty, we started commissioning all the systems. The Detroit Diesel technicians had arrived from the USA and started the required checks on the Detroit Diesel V16 engines and the Northern Light generator sets. All the various trades worked incredibly well together to achieve our goal of conducting our first sea trial on our original set date of the 26th of November 1998.

We cruised out of the river with all systems operational. Again, I was feeling so nervous that I thought I was going to be sick. As we approached the measured mile, we were sitting on 1800rpm and Whistler felt like she was going slow. I then became really worried until I looked at the GPS and saw that we were actually doing 19.5 knots. There was no sensation of speed at all and she was so very quiet. I was then thinking only 500rpm to go to achieve the 26 knots required. Another wave of panic. Ian Sergeant gently pushed the throttles down to maximum rpm of 2360. She felt a bit faster, thank goodness. I then made myself look at the GPS again to check that we’d achieved the desired 26 knots. To my great surprise, we were sitting on 29.1 knots. Wow!! Check the tide direction and yes, it was with us. All the same I knew that the boat was achieving all our goals and more. We did a two-way run on the measured mile and achieved an average of 28.8 knots. I was extremely relieved; Adam was beside himself and Ian Wright had a huge smile on his face as did all staff and subcontractors on board did. It was a great moment.

The vessel was then duly completed. Many more trials were undertaken to ensure she was as perfect as we could make her. She was then handed over in January 1999 to the owner who has since taken her on extensive cruising of the east coast of Australia, New Zealand, Papua New Guinea and the Pacific Islands.

To this day I consider Whistler to be our greatest achievement during Ian and my time at Norman Wrights. A special thanks to all the team – Adam, Nigel, Nolan, Peter Roberts, our tradesman and admin staff, Lex Baddiley, Paul Smallwood, the High Modulus boys, TMQ, Bob McCallum, Pam Brown and Ian Sergeant.

I would also like to particularly thank our client for allowing us the opportunity to build such a beautiful boat. (The client still owns Whistler to this day).