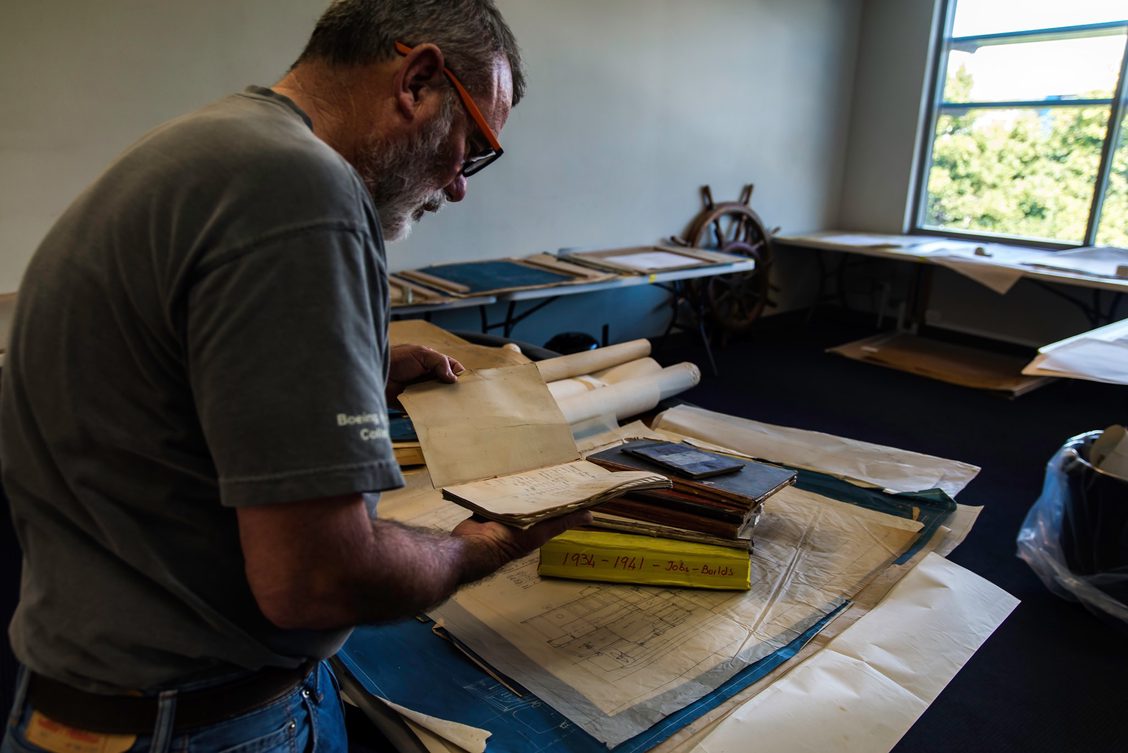 The Norman Wright Archives – A Step Back In Time

The Norman Wright archives date back to the 1890’s. It is a complete history of our boats and boating in Queensland since this period. Not only do we hold all the plans, photos and models of the all Norman R. Wright & Sons boats since 1906, we also have an amazing collection of plans from other designers and builders, some of them listed below:

Amongst so many other rare books and journals, there are too many to mention. This story takes you on a step through time, an idea of the incredible history that lies within our business, and the massive job I’ve had to try and piece it all together in our archive.

Since my early childhood I was always amazed by the huge number of plans that were spread in dad’s offices, both at Quay Street and at home, my grandfather’s house and at Uncle Norm’s. There seemed to be a plan, model or photos in every drawer and cupboard, particularly at my grandfather’s house. I had always wondered what they all were? Were they built? Were they famous? What happened to them? So many questions I had always pondered.

Grandfather Norman used to give Ian and I half models to play with in the sand pit. I hate to think how many half models we wrecked in that sand pit! The other question Ian and I would ask Grandfather was where was the other half of the model? He used to laugh and suggest we try and find it!

As we grew older, neither of us ever lost interest, particularly with the models. We progressed from Grandfather’s half models to Dad’s tank testing models, we did have the best model boats to play with when on holidays at the Noosa River. One particular model was outstanding for Ian, the resistance tank testing model of the 75’ Mooloolaba Pilot Boats. The model was about 7’6” long and Ian only 8 at the time and quite small could easily fit into the model and use it as a very flash canoe.

As Ian and I progressed into our boatbuilding apprenticeships we were far too busy learning our trade, sailing and boating to pay much attention to what we were surrounded with. The boat yard at 26 Quay Street was really a working museum but we were far too busy with work to realise this. It wasn’t until much later in life that we realised what we had become the custodians of. Fortunately we were aware enough not to throw away anything of historical value.

About 15 years ago I was asked by Ian Holman how many boats we had built, and I said I really didn’t have a clue. This made me think I should at least try and catalogue all of the boats. But wow, I had no idea what I had let myself in for.

I had to make a start, somewhere, but where? So I thought I’ll start from 1970 and anything from that time moving forward, basically when I officially started at NRW. Between Ian and I and the other staff members we could easily list all of the boats we’d built from 1970. No problem with the year of build, the owners name and what had happened to the boat in the meantime. The filing system we had was introduced in 1984, which is an excellent system as it allowed us to access all boat plans, models and files for the period. So 1970 to 2021 has been fairly straight forward.

Next I thought I’ll do from 1960, as Ian and I could remember most of the boats built by NRW at the time and it was a golden era, some amazing boats built during that time including “Beryl May” (South Pacific), “Bali Hai”, “Killara” (A fast customs boat), “Flinders” & “Oxley” the Mooloolaba Pilot boats, “Dolphin” (the first large cold moulded boat built in Queensland), “Coralita”, “Idle Hour” and so many more. So even at the age of 8 I had very clear memories of going on sea trials of “Beryl May” and “Bali Hai” and clear memories of the fabulous launch parties we had, in particular “Bali Hai”.

Dad’s filing system was complete but the files and plans were all over the place. It took me a long time to fill in all the gaps for the vessels built during this period.

So where to next? 1950’s or back to the start? I had a look at the 50’s and it looked all too hard so I made the big decision of starting with boat number 1 “The Commonwealth”, a 10 foot skiff built in 1906, I had the plans, the model and photos, easy!! But how would I find the remaining boats from 1907 to 1960? I talked to Dad, he said go to the archive room (at 19 Byron Street Bulimba) and look for ledgers and pricing books, it’s all there. So that’s what I did. I found all of these amazing books, which took me back to 1914, only the earliest book was missing.

So over the next 5 years I worked my way through each and every one of these books. I had to work out if the boats had been built, who for, the date built, then eventually find the plans, photos and if possible the half model. Sounds easy but as I quickly found out it was like an Agatha Christie mystery. My Grandfather’s filing system was very good, once you understood it. The ledgers all had page numbers, these page numbers became the file number for the boat. Grandfather Norman would mark the page number on the plan as well. Again sounds easy, except each new ledger started all over again at page one. So yes very confusing again as there are about eight large ledger books.

So  bit by bit I pieced together a mega spreadsheet showing typically a file number, boat name, year built, length, power, fate etc. I then added more rows for photos, plans and a model if they existed.

The most difficult decades were the 40’s and 50’s. The 1940’s were the war years, so a great deal of the work we undertook was confidential or top secret, so trying down Department Of Defence records was difficult and in some cases impossible. For example the secret vessel files or plans for the likes of the “Bintang Sian” had been destroyed as soon as the vessel was complete.

The 50’s was also difficult as Ron’s filing system was impossible to follow. So I reverted back to all of the files that existed from this time, reading each file to ascertain if they had been built, and if so, who for and what did the boat look like? This era is still an ongoing challenge for me.

With the spreadsheet as complete as I could get it the next job was to create a filing system to encompass all the boats from 1906 to now. So typically, “Commonwealth”, the first boat built by NRW in 1906 became file number 1906-01. “Bali Hai”, built in 1963, the second boat completed that yar, would be file number 1963-2.

Now the big job is matching all the plans of the vessels built from 1906-2021 and also the half models. Also renaming all the vessel build files with our new master file number. An update to this – all plans, models and files from 1984 to 2021 are now complete. From 1906 to 1984 I would guess that we are about 10% complete, still plenty of work to be done.

This is and has been a massive job but has also been extremely interesting, rewarding but equally frustrating. We will continue on!!

More recently, we designed a new custom database to store the entire archive and provide automatic updates to our website.  The first 20 NRW boats have been loaded into the database and you can access it here: https://www.wrightsons.com.au/first-20-boats/  You will see the archive has the ability for the public to upload comments/files/photos for each boat and we greatly encourage you to contribute any information that you have.  Every time we upload a batch of new vessels, we will let you know.