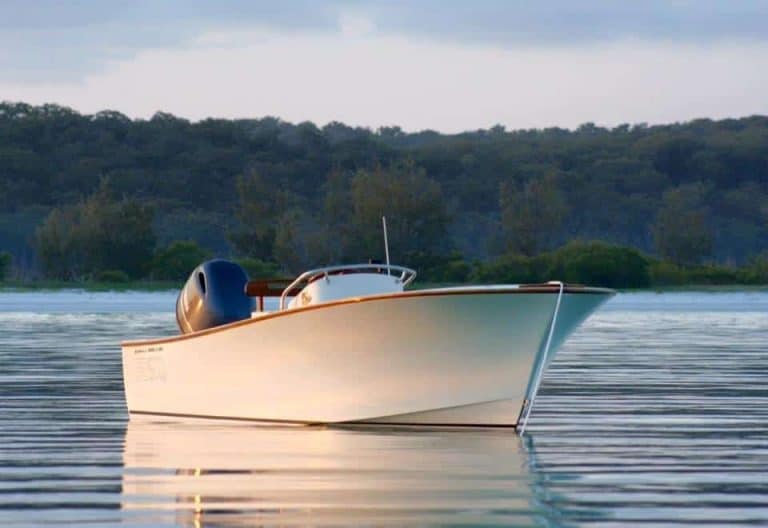 James Tuma rang me one day in March 2014 and asked if I would be interested in designing his new boat. I asked “What sort of boat James?” His reply was something I had always wanted to design, a fast centre console fishing boat. I was obviously thrilled to be involved with the project and immediately said yes.

I then asked “who is going to build her” and he said “Pissy” or Ian Eastgate for those who may not be as close to Ian as James is. I again thought how good is this. I’m going to design the boat I’ve always wanted to design and build it with my good mate Pissy. Ian is a great boat builder and I knew he would build the boat to a very high standard and most importantly he would build her to the designed weight.

James gave me his design brief – she was a centre console 19-20 foot long, classic lines and a nice flare in the bow able to achieve 40mph powered by 110 horse power. He explained that he normally fishes by himself or with one other on board so we decided to build a sleek and slender boat with very good speed & seakeeping. I did some calculations and came up with a target weight of 900-1,000kg’s, 23 degree deadrise amidships, 110hp outboard and LCB of 62 percent when loaded.

First problem for me though was that I know nothing about fishing and I know very little about designing outboard powered boats. The truth is I had only ever designed one other outboard powered boat and that too was for a mate called David Lambourne, a story for another newsletter one day. James was not phased and said he would give me an exact brief on the fishing side of things, which he did do. I thought I’d have a chat to David Lambourne and get his feedback in relation to any changes he would maybe make based on his outboard boat. David said all was good but to be sure to keep the LCG well aft, which I noted and aimed to achieve with James’ design.

The initial design came together very quickly over a single weekend and I asked James to provide his feedback and critique the design. James requested I remove the tumblehome aft as it condensed the room for fishing in the aft of the boat. Apart from a few other small variations no other changes were made to that initial design.

With the design complete and James happy, I proceeded to print Mylar cut-outs for Ian Pissy to then build the framework for the jig. Ian constructed the hull very carefully as per the design and weight predictions and strip planked the hull in Western Red Cedar and then glass laminated the hull with a triaxial and double bias glass cloth and epoxy resin. Ian, as usual, proceeded very quickly completing a beautiful job of the hull. Ian’s offsider Lionel then faired and painted the hull and interior while Ian constructed the polished teak console, seat and toe rails.

On completion the boat was weighed with our load cells and found to be right on weight, which was very pleasing. We also checked fore and aft balance to ensure we had achieved our LCG, which was also correct and a great relief. I was thinking to myself at the time “I hope she goes as good as she looks”.

Launch day arrived with James and Pissy excitedly launching “Wild Banks” as she was now called, and they ran her from Colmslie Boat Ramp up to our shed on the River. They called on the way and told me to head out to the jetty. There she was speeding by and “wow’ she looked stunning and ran just as I’d hoped. I yelled to Pissy and asked how she ran, as he does he replied with “Like a f#$%ing rocket”, which obviously brought a smile to all our faces.

James asked if I wanted to go for a run and I said “No mate, I’d prefer to watch you guys doing laps of the yard” which they did and I was just so happy with the result. James then took delivery of “Wild Banks”, such a fitting name.

After delivery, James did some initial trials around Moreton Bay to see how she handled and to achieve the best balance with fuel, fishing gear etc. After this was completed he, Simon McGuire and Peter Jenyns took off in their various boats to Watoomba Creek near North Fraser Island for a week of fishing and camping. During the time James fished “Wild Banks” extensively fine tuning how he operated and fished her. By the end of the week he confirmed he had a very good fishing boat which performed really well in all conditions, with the stability and seakeeping allowing him to stay at sea longer than his counterparts.

Since then James spends plenty of time out fishing and boating, and the smile still hasn’t left his face, or mine!!