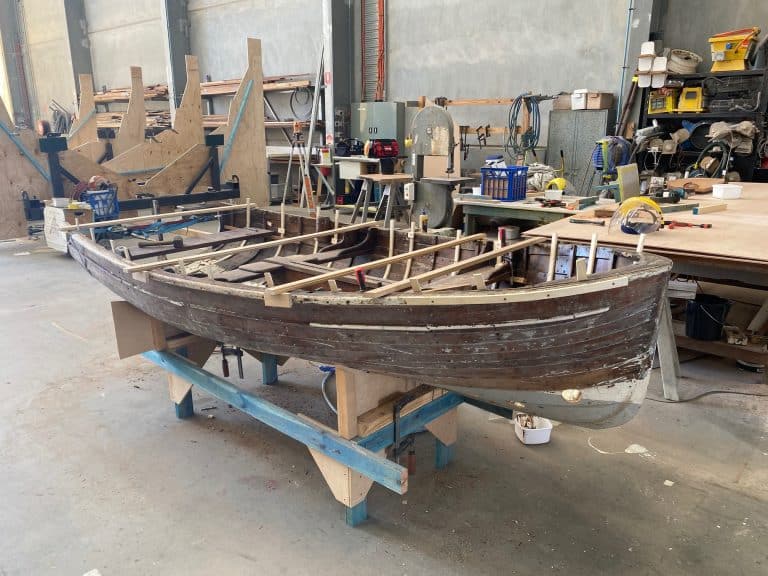 We have some wonderful nostalgia in the yard at the moment. We’ve taken on a pet project with the refurb of an original Watts Wright clinker tender called (“Zest”) once owned by Merv Hazell. Lance Watts and Alec Wright, younger brother of Norman R Wright, traded as Watts and Wright from around 1934 and built a reputation for designing and building quality 12-16 racing skiffs up to 21 footers. Long time NRW timber boatbuilder Ian Wells has returned to share his timber boat building knowledge and skills with our apprentices who will restore “Zest” to as close to original as possible. We’ll hopefully complete her in time to display at the Wooden Boat Festival in Tasmania in February.

Thanks to Malcolm Hazell for providing us with some further background into our project Dinghy “Zest”. Malcolm believes “Zest” was built for use by the Naval Cadets at the Church of England Grammar School, with Pat Fleming the Officer In Charge at the time. Neville Hazell, Malcolm’s father, was a senior teacher at the School for many years and when the Sea Cadets folded Neville obtained “Zest”. He then set about methodically stripping her back to bare timber and restored her to original condition.

During school holidays on their boat “Flockwing” they would take the “Zest” and spend many enjoyable hours sailing around the “Jumpinpin” area. Sadly Neville Hazell was diagnosed with serious skin cancer and as a result had to sell “Flockwing” and the associated dinghies.

He gifted “Zest” to Merv Hazell Snr who in turn passed it on to his son James for care and subsequent use.