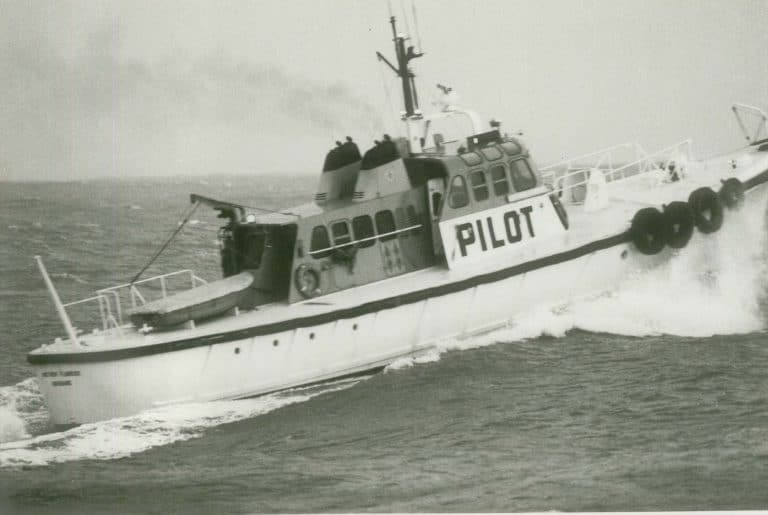 Matthew Flinders – From Who We Are Judged

As a young boy I loved accompanying Dad when he went tank testing. This took place in the University of Sydney tank test facility, a small tank run by Professor Holiday. The Professor and Dad got along famously, they would watch the model run, collect the data and then madly get to work on their integrators. I would sit there patiently waiting for the next model run, and the mathematical side of things always seemed so boring when you could be playing with the model.

In 1965 Dad arrived home to tell us he was off tank testing again and I thought you beauty, I may escape my Churchie Grade 5 Class for a few days in Sydney, and even better getting away from the much feared Teacher Mr Robinson, or Robbo we called him. But alas it was not to be this time, and I was oh so disappointed.

It was however a great time for Dad and the business as he had won the right to design the new 75’ Class Pilot Boats to be run out of Mooloolabah servicing the arrival of the ships heading into and out of the Port of Brisbane. These new Pilot Boats would replace the small Cutters that had previously transferred the Marine Pilots onto the ships.

Furthermore Dad also explained that he would be travelling to Westland Corporation based in the Isle of Wight in England to conduct more detailed testing of the new designs in larger more suitable tanks, the new models included resistance and free running models which required a much larger tank.

The Department of Harbours & Marine as they were known at the time had awarded Dad the design contract for the new Pilot Boats, the building of the boats would be commissioned under a separate tender agreement. Fortunately in those days the Queensland Government always supported local industry very rarely looking outside of the state, or god forbid overseas, to have their products designed and built. Those were the days when Queensland made our own rail stock, motor cars (yes there was a car plant in Qld), ships and even aircraft. Makes you wonder doesn’t it!!

The new pilot boat class was going to be like no other in the world at that time, state of the art with the capability to operate in all weather conditions. The boats would be 75 foot long, a top speed of 24 knots, operating speed of 18 knots thanks to twin 840hp Twin V12 engines and built in double diagonal skins of Queensland Maple on laminated steam bent spotted gum frames and ribs. Initially 2 of the new boats would operate in all weather conditions including cyclones, out of the newly built boat harbour and pilot house at Mooloolabah.

A little known fact is that Mooloolaba harbour was actually built to service the pilot boats, and while it still provides this service today, the marina is also a gateway to the wonderful boating destinations north and south.

When Dad completed the tank tests in the UK and the models were returned to Australia, the free running was missing, it had seemed to have vanished. Some 50 years later Dad and my brother Ian found the model at the Queensland Maritime museum where someone had kindly donated it, and they in turn returned it to Norman R. Wright & Sons due to the significance it has for our business.

On arrival of the resistance model from the UK Ian, being smallish for his age, claimed it and it became his personal canoe for rowing around the river. Quite a flash canoe indeed.

On receipt of the final tank test reports Dad was delighted to know that all of the design paramaters had been tested and met and the Government of the day then put the construction of the first 2 pilot boats  out to tender.

It was about the same time in 1966 that Dad, Mum, Ian and I were involved in a serious & tragic car accident on the Bruce Highway near Beerburrum. Ian was lucky to escape unscathed while Dad and Mum were seriously injured, both taking many years to heal from their injuries.

As a result of the accident Norman R. Wright & Sons was unable to tender for the construction of the new boats Dad had designed. The successful tenders went to Millkraft, who built Matthew Flinders and Hugh Morris Boat Builders who built the second boat the John Oxley.

The new boats were successfully built to the design parameters and were trialed and delivered to their new home at Mooloolaba, whilst undertaking speed trials on the Measured Mile in Moreton Bay. Interestingly the John Oxley was a bit quicker achieving a top speed of 24.8 Knots but Matthew Flinders was a little heavier. They both arrived at Mooloolaba and were placed into operation.

Interestingly the John Oxley was very reliable as a result of good operation by the Skipper Phil Robinson. The Finders on the other hand kept destroying gear boxes, also due to the operation of the Skipper who will remain nameless. It was discovered that a certain Skipper loved to join the surfers outside the entry to the bar and would regularly catch waves and complete some fancy manoeuvres. He would then simply pull out of the waves by putting both engines into full reverse, not exactly what they or the gear boxes were designed to do or handle.

Both vessels operated successfully for many years through storms and cyclones, and were rarely unable to work due to extreme weather. The determining factor on whether they would go out or not was if the waves were breaking over the deck of the ships, as this prevented the boats coming safely alongside the ships, for the chance they would end up on the deck of the ship itself. This did actually happen once with an even larger wave washing the boat back off the deck and into the ocean, with the boat suffering damage but still able to operate.

Millkraft repaired the damage re-planking the damaged area of the engine room and re-attaching the furniture that had dislodged by the impact.

Both boats were in service from 1967 to 1987, when the Pilot Service was privatised and operated by Brisbane Marine Pilots who still operate Brisbane Pilotage today. The John Oxley and Matthew Flinders were sold at the time to Sydney based boating identities to be converted into pleasure craft enjoying more calmer seas still today, and were replaced by the new 44’ Spitfire Class Pilot Boats also designed and built by Norman Wrights.

Ron Wright considered the Matthew Flinders and John Oxley to be his best design. Fantastic boats and still the benchmark we use today to judge our pilot boats.